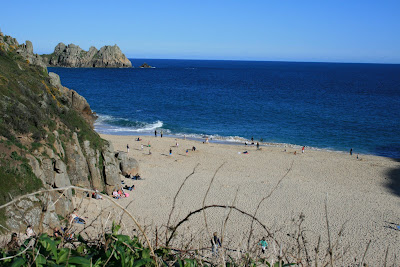 Spent the morning at an Easter Baptism ,very moving and the afternoon on Porthcurno beach which is between us and Lands End on the south side of the peninsula.Just above to the right of the cliff lies the Minack Theatre which is a theatre carved in stone . This is the spot were Telegraph cables were first laid accross the oceans to the Empire right under the sea in 1800 and something.The cables and still there to this day ( although a little rusty) right by the Lifeguard hut.Half the accents on the beach seemed to be German. We have a large German tourist count here also Americans and Londoners who seem to be rather touchy about the lack of service.!!I have prepared a 30x40 inch canvas as I am in the mood for a large one as the nun said to the vicar.I shall start preparing in fits and starts over the next couple of days.
Posted by alan furneaux at Sunday, April 12, 2009