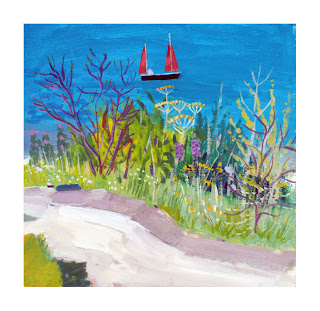 But a smaller boat popped out later. I need to work on the path on this one. In fact my next mission is to concentrate on paths.While I was there and I was only there 1 i/2 hours. Two guys were drinking the hard stuff a little further up, a group of teenagers in there flash cars were chatting up some girls about 20 yds behind me and two very beautiful Polish girls walked past ,totally ignoring me as they chatted away, and some bloke drove up about a few yards away to walk his dog,said a cursory hello and went about his business. All on a tiny bit of deserted beach near Newlyn.By the time I had finished the beach was empty.
Posted by alan furneaux at Tuesday, July 21, 2009